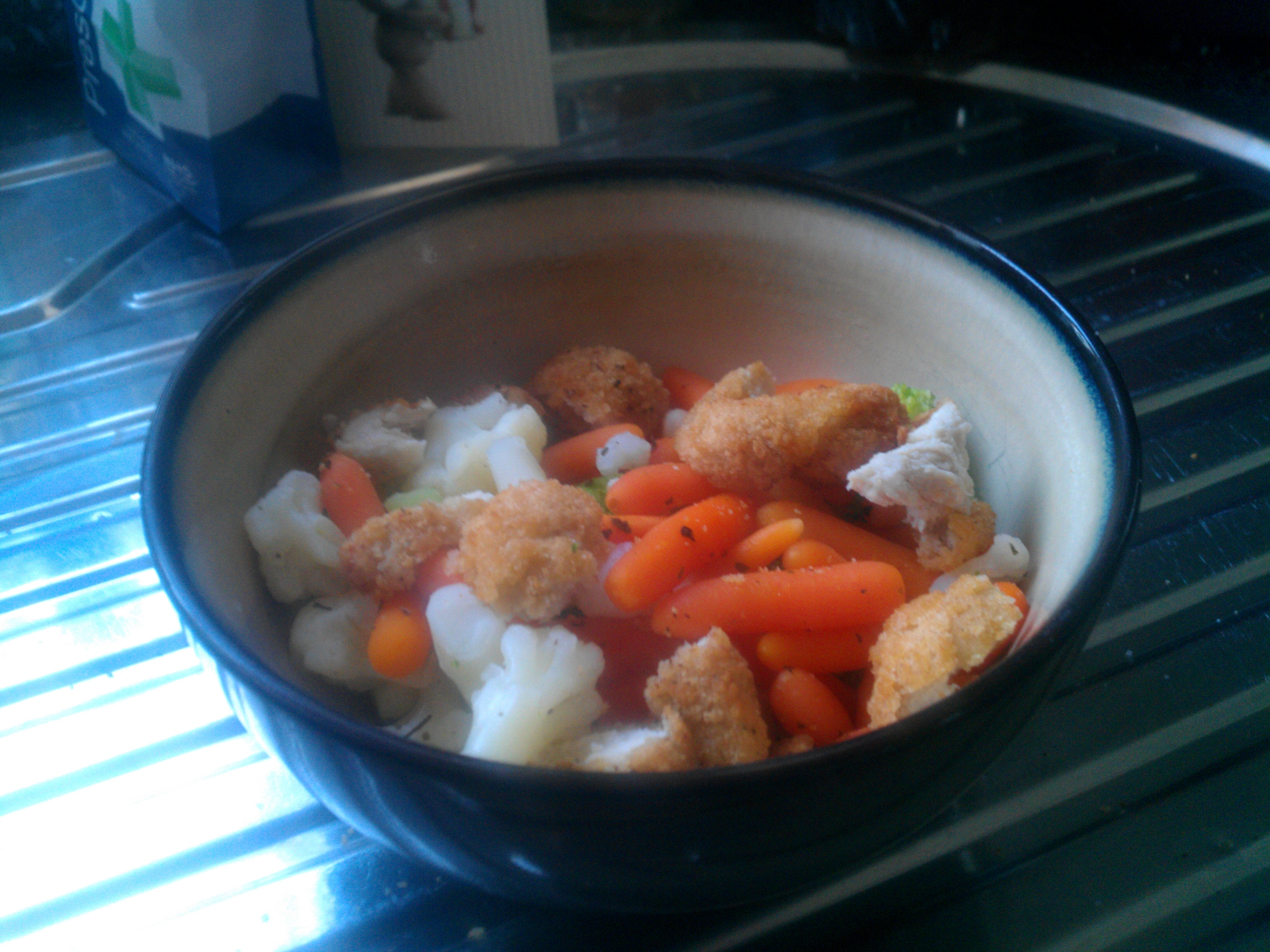 Day 9 is a return to Pure Cardio. Similar warmup to other days with such joys as Push Up Jacks. A few little aches and pains appearing now, my left calf muscle in particular is aching today something awful. Not enough to stop me but it does emphasise the importance of the warmup. Critical.

I’ve been hinting at writing a post on Food since day one pretty much and I’ve got 20 minutes to myself so I thought I would explain what and why I’m eating. I’m not a dieter. I am rubbish at it. This isn’t wholly surprising when you stop to take a look at the world around you just for a minute or two. Take for example a recent trip to a well known supermarket’s “corner shop” style store. At the self serve checkout, I was literally surrounded by chocolate. It was stacked on the window ledges. It was in little plastic bowls attached to the till. It was sat on the floor in a display behind me. It was fucking everywhere. I’ve only really noticed this since I started Insanity – just how much crap is being funnelled at you it’s a miracle we eat anything healthy.

So, combined with my vice for food, and the plentiful availability of it in a city like Glasgow. Dieting is never going to work for me.

What are you doing then?

Simple really. If I can avoid eating crap I will. However I will not feel guilty about eating less than healthy food. I have a wife and two small children whom I refuse to drag into a world of vegetables and no ice cream. If we’re out, and the boys want to go to McDonalds, we go to McDonalds. If we’re at a friends house and they’re phoning a Chinese, I’ll have a Chinese.

I am trying to be conscious of what I eat. The McDonalds menu get’s a bit more of an inspection to see what they have which might be better for me (rather than the default, “I’ll have a Large one of whatever special you have this week please Ronald”). My wife has mentioned tonight that we’re having Chinese. Cool. I’ve started looking at other parts of the menu to see what’s likely to be the least offensive but still tasty. Chicken with Beansprouts is looking like a good option but I’ll ask if it comes lathered in MSG filled sauce first … if it does, sure fuck it. Work harder tomorrow.

When things are in my control, at home, or if I’m cooking dinner, or breakfast/lunch at work. Then yep, I’ll probably look like I’m dieting. Why? Well, after a few days of Insanity you start to feel really stingy about calories. You’re knocking your pan in during these workouts, I finished today literally dripping with sweat (sexy!), it’s a natural reaction to start thinking “I’m not wasting that effort, no way”.

The dish in the photo above is a perfect example. Lunchtime in our house at the weekend generally involves something like Toast, or chicken nuggets, or maybe a fry up if I’m feeling glamorous. Today the boys got their little chicken nuggets, the wife got her toast. I on the other hand, chucked in some frozen veg (heated, obviously) and took two of the chicken nuggets – whipped it together with some Pepper and voilà  Pretty healthy, pretty tasty, 5 minute lunch.

So it’s not a Diet per se, it’s just using your noggin a little bit.

What should be really amusing though is next week. Christmas Week. Office Party Week. Gulp …